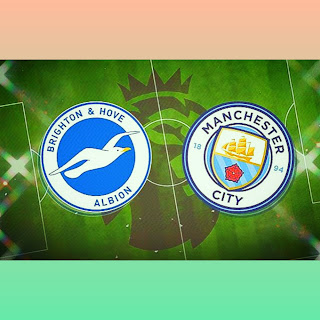 Manchester City dominated Brighton in the opening half to maintain their pressure on Premier League leaders Chelsea.

Last season, after clinching the title, City were defeated at Brighton in their penultimate game, with Joao Cancelo sent off early in the game. The Seagulls have had a strong start to the season, and after eight games, they are in fourth place, one place behind City.

Pep Guardiola has warned his team about the dangers that Brighton can pose, fielding a strong team at the Amex Stadium that includes Gabriel Jesus and Ilkay Gundogan, who both returned after their midweek success in Belgium. After suffering an injury in the build-up, Raheem Sterling was left out of the team, according to Guardiola.

Phil Foden struck twice and set up another goal as Manchester City impressed in a 4-1 victory at Brighton & Hove Albion.‏

Ilkay Gundogan opened the scoring after being teed up by Bernardo Silva 13 minutes in. ‏

Foden took the match away from Brighton with two goals in three minutes, the first of which came from a Jack Grealish pass. ‏

His second was more fortuitous, Gabriel Jesus’s shot glancing off him on its way into the net. ‏

Brighton put the champions on the back foot for most of the second half and were rewarded when Ederson fouled Enock Mwepu in the area.‏

But Brighton’s efforts fizzled out and Riyad Mahrez scored from Foden’s pass in the final minute of stoppage time to add gloss to the scoreline.‏

Attempt saved. João Cancelo (Manchester City) right footed shot from outside the box is saved in the centre of the goal. Assisted by Kevin De Bruyne.‏

Attempt blocked. Phil Foden (Manchester City) left footed shot from the left side of the box is blocked. Assisted by Kevin De Bruyne.‏

Attempt blocked. Phil Foden (Manchester City) left footed shot from the left side of the box is blocked. Assisted by Kevin De Bruyne.‏

Attempt saved. Phil Foden (Manchester City) left footed shot from the left side of the six yard box is saved in the bottom left corner. Assisted by Kevin De Bruyne.‏

Attempt missed. Tariq Lamptey (Brighton and Hove Albion) right footed shot from the right side of the box is close, but misses to the right.‏

Penalty conceded by Ederson (Manchester City) after a foul in the penalty area.‏

Attempt missed. Solly March (Brighton and Hove Albion) left footed shot from outside the box is high and wide to the left. Assisted by Tariq Lamptey.‏

8 of the strangest animals in the world