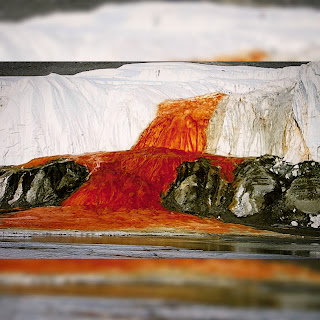 isn’t a flow of blood from some hidden wound, despite its reddish hue. The hue was previously attributed to red algae, but a research published in the Journal of Glaciology discovered its actual source by scanning the strata of ice from which the river flows with radar.

The finding was made by a group of scientists, including Erin C Petti, a National Geographic emerging explorer. The falls flow from Taylor Glacier in Antarctica’s McMurdo Dry Valleys, and the liquid bubbles up through fractures in the glacier’s top.
Because the average temperature is 1.4 degrees Fahrenheit (-17 degrees Celsius) and no glacier melting can be detected at the surface, the flow was previously a mystery. 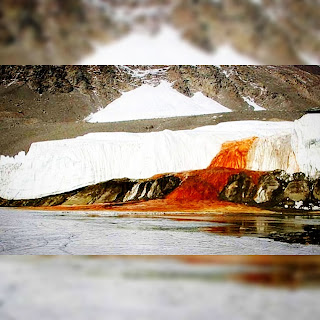 Imaging from under the glacier revealed a complex network of subglacial rivers and a subglacial lake, all loaded with iron-rich brine that gives the falls its crimson hue.

Small fractures in the ice cascades occasionally leak iron-rich hypersaline water. The saltwater source is a subglacial lake of unknown size that is surrounded by ice for about 400 metres (1,300 feet) many kilometres from its little outflow at Blood Falls.