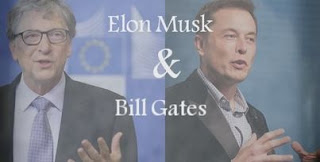 While they have international, even Interplanetary, businesses to run, or world-saving foundations to oversee; Billionaires, so it seems, also have plenty of time to fight.‏

In recent months, the multi-billionaire’s club has been rocked by an ongoing feud between two of its senior members. The battle between Elon Musk and Bill Gates has been public, brutal, and unapologetic. It has been fought on social media, interviews, and blogs. It’s a battle that stretches from electric cars, the coronavirus pandemic, and to plain name-calling. similar to the personas of the two tech-nerdy moguls, the fight is captivating and awkward. You can’t take your eyes off of it.

at the height of the Covid-19 pandemic, the competition got much more ferocious. Musk made a number of particularly contentious remarks, including the following: He tweeted in March that “the hysteria will do more damage than the virus.” He slammed lockdowns in April, branding them “racist” and describing them as “forcibly imprisoning people in their own homes.” He was an outspoken supporter of the drug Hydroxychloroquine. He predicted that “by the end of April [2020], there will be almost no new cases in the United States.” There are only a couple of the possibilities. Musk was forthright in his assessment of the pandemic.

It was Gates’ turn to take the offensive this time. “Elon’s positioning is to retain a high degree of outrageous comments,” the Microsoft founder said in an interview with CNBC. He isn’t really interested in vaccination. He makes a fantastic electric vehicle. And his rockets are successful. But he’s free to say whatever he wants. I hope he doesn’t get too mixed up in areas where he isn’t involved.” It didn’t take long for the comeback to begin. First, there was Twitter. Musk was tagged in a tweet that included the Gates interview quotation. Musk responded, “It doesn’t stop there.” When asked about his response to the pandemic in an interview for the New York Times podcast “Sway,” Musk said, “Tesla makes the vaccine machines for CureVac.” According to Gates,

It’s one thing to become a hero of your own, but Musk understands that finding an archrival takes you to a whole new degree of legendary status. Just a few examples of artistic and corporate geniuses who battled their way to joint success include Rockefeller and Carnegie, Edison and Tesla, and Michelangelo and Raphael. Musk is choosing battles in the hopes that anything will stick. I believe he’s on the lookout for a deserving archrival that can propel him into the prestigious “hall of fame of grand rivalries” for years to come.

Is it possible that in Bill Gates Musk finally found a true nemesis? Gates himself has something to gain from this rivalry too. Although being ‘out of the business game’, Gates could find flattery in knowing he was considered an ‘archrival material’ for a new generation of entrepreneurs. Like Michael Jordan facing Isiah Thomas and years later facing Kobe for a much-discussed 1 on 1, so could Gates feel satisfied for being the archrival of Steve Jobs, and years later, feuding with the man many claim is his successor.‏

Information about the names of the calendar months – siraj

the most dangerous hacker of all time